The 10 Best Cities In The United States

What are the best cities in the United States? That’s a hard call – the country is packed with gorgeous ones. Some are well known, some not so much.

Why do so many tourists choose the United States as a vacation destination? The reason is very simple, the country offers a huge variety of attractions that please the whole family: from cultural rides and adventure tourism, to the possibility of experimenting the unique lifestyle of the Americans.

The thing I like the most is the cultural diversity. According to a United Nations study, the United States welcomes over a million migrants every year, and it’s the country with the highest number of foreign residents living inside its borders (45.8 millions).

It’s incredible to walk, for example, in New York and find people from all around the world. That mixture of languages, with the typical sound of a big city and the clicks of the cameras that one can only find in the Big Apple is amazing to me.

Going shopping in the United States is another unique experience. I always find the most important brands, not to mention the great amount of outlets with its brand clothes at cost price. Another important detail is the facility to travel around the country, there are various options that depart at every hour to every destination.

For those who are still planning their trip, I share my pick of the 6 best cites in the United States. Surely these cities will also conquer anybody’s heart. 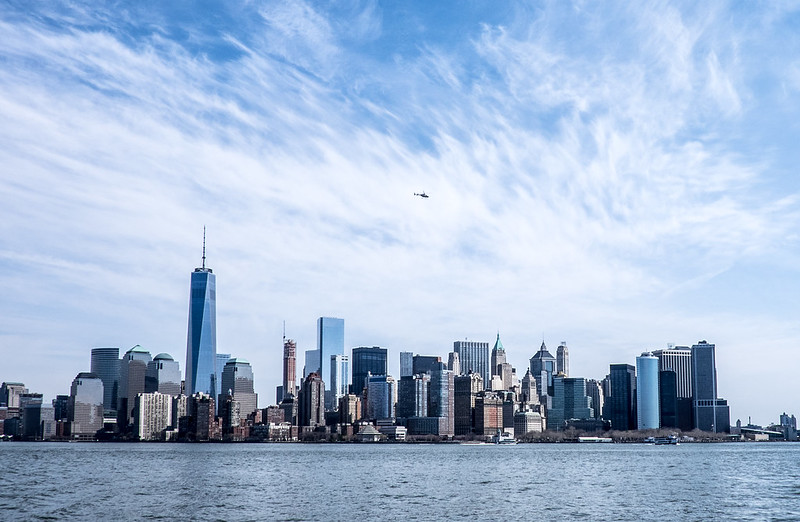 The 10 Best Cities In The United States

There is little doubt that New York is one of the best cities in the United States.

How can one not fall in love with the Big Apple! Sure enough, it took me a second to do so. And after that one time I vowed to live in the city. Which I did! Postcard to varied movies and theme of emblematic songs as “New York, New York” by Frank Sinatra, and “Empire State of Mind” by Jay Z, the “city that never sleeps” enchants people with its skyscrapers, parks and the cosmopolitan life.

Between the tourist routes, the mandatory stops are the Statue of Liberty, which is a UNESCO World Heritage Site, the Empire State Building, the Brooklyn Bridge, Central Park and the Rockfeller Center. And of course, how can you go to New York and not reserve a day to go shopping! Fifth Avenue is almost every woman’s dreams, with its famous stores like the giant Macy’s.

When it’s time to eat the city presents a great gastronomic variety, for all tastes and budgets (from a hot dog car and food truck to the most acclaimed restaurants).

Don’t miss a Broadway show or a typical New York bar like McGee’s, the one that inspired the TV series ‘How I Met Your Mother’. As the Jay Z song said, “there’s nothing you can’t do” in New York.

Denver has some unique attractions

To me, Denver is among the best cities in the United States and I feel a special bond with it. I love quietness and nature, and without a doubt Denver is my city to go for that! It’s no wonder I lived there for more than two years while I completed my studies. There are over 200 parks spread around the capital of Colorado.

But the advantages do not end there. The biggest Colorado city is also known for encouraging sports and healthy life. There are over a thousand kilometers of bicycle lanes, transforming Denver into the city with the biggest interconnected lanes line of all the United States.

Denver is also surprising for its street art: diverse murals, paintings and sculptures are spread through its lanes. Another curious fact is a program called Denver’s Public Art Program that directs a part of the council’s monthly budget for the inclusion of art in the city’s constructions.

If you like skiing, you will be happy to know that Denver is pretty close to the most known stations of the United States, Aspen and Vail. 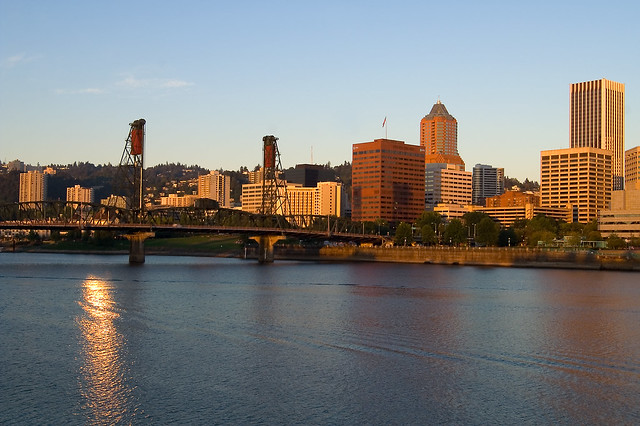 It’s easy to see why Portland is one of the best cities in the United States.

The biggest city of the state of Oregon is known for its unique personality, one of the reasons that attract thousands of tourists every year. Wherever I walk, I’ll find a park, with lots of trees everywhere.

Make sure of visiting the Japanese Garden and O Lan Su Chinese Garden, both downtown. Another Portland curiosity is that a big part of its population are followers of recycling, sustainability, public transport and bikes.

The Portland Art Museum, in the heart of the cultural region downtown, is famous for its permanent modern art collections. In the popular neighborhood Old Town, people line up to taste the Voodoo Doughnut inventions, with flavors like bacon, cereals, and marshmallows, among others. Close to that place is the Portland Saturday Market, the biggest fair of arts and crafts in the United States. 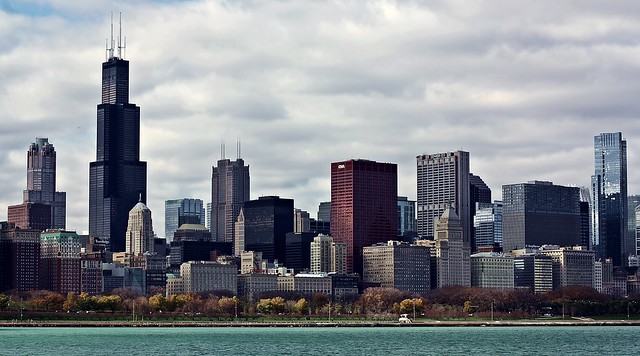 The incredible skyline of Chicago – photo courtesy of Matt B (flickr)

Among the best cities in the United States one has to mention Chicago.

City of celebrities like Mr. Obama and Mrs. Oprah Winfrey, Chicago is known for being the land of the blues and jazz, with unique and authentic rhythms. The starting point for visiting the city is the Millennium Park, with over 99 thousand square meters of green areas above the train stations.

Another postcard I never miss is the Cloud Gate, better known as The Bean, created by the designer Anish Kapoor, inspired by liquid mercury. Whenever I am looking for a wider vision of the city, I head to two of the main skyscrapers; the 360 Chicago (the old John Hancock Observatory) and the Skydeck, the famous Willis Tower.

And no trip to Chicago is complete without a stop at Art Institute. Inside the museum it is possible to find five thousand years of history narrated in different paintings, sculptures, fabric, photography, objects and decorative arts from all around the world. 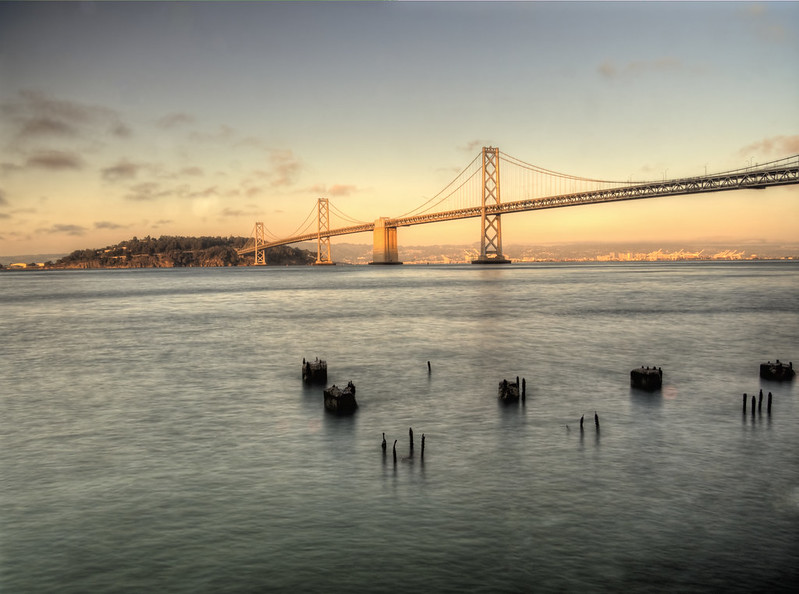 No trip to the United States is complete without visiting San Francisco – it’s one of the best cities in the United States. The city breathes life and enchants with its beautiful landscapes. I’ll try to resume some of the places that you must visit: the colorful buildings in Valencia Street, neighborhood known for its pre-hispanic inhabitants.

The Mission Dolores Park has an impeccable lawn, everything is local, is low cost and has good quality. All the prices in the menu are written with chalk in a big board and have the rates included.

A walk between Bay Bridge and Fisherman’s Wharf is mandatory, and taking this journey I always get some of the nicest views of the city, as the bridges Golden Gate and Bay Bridge, the Island of Alcatraz and the sea lions of Pier 39. The Lombard Street is one of the most inclined of the world, with its accentuated curves. The view from the top is amazing, but from the bottom it’s even more enchanting.

I like biking, so I generally rent a bike and cross the Golden Gate to Sausalito and come back with the Ferry. Make sure to go for a ride with the F line that connects the Castro (alternative neighborhood), to Fisherman’s wharf. This line has historic trains that come from different cities of the world!

To end up, make a stop at Market Place, this brings together a variety of stores that sell all types of food one can imagine. I like experimenting new flavors, so this is my place! I bet it will be yours too.

Many will argue against this, but other will say that Miami, Florida – allegedly the weirdest State of the Union – is one of the best cities in the United States.

Needless to say, the first place you have to hit in town would be Little Havana, to get some Cuban flavor and some much needed Cuban food. And while at it, make sure to go salsa dancing and practice my steps. And, as I am a beach kind of girl, I would definitely recommend to spend some quality time toasting in the sun and swimming in the clear waters of Miami Beach.

Don’t forget that in order to enter the United States a visa is necessary. Believe it or not, I forgot I needed it once when I had a layover on my trip back from Mexico, and I almost got stuck. Thankfully, it is possible to stay organized and make ESTA applications before traveling.

The famous city in Washington State deserves the title of one of the best cities in the United States. The quirkiest town in the United States is where popular TV shows such as Grey’s Anatomy (incidentally, my favorite TV show!) and Frasier (though younger generations may not know this one). It’s where the grunge music movement originated from – ever heard of Nirvana and Kurt Cobain, guys?

Among the places to visit in Seattle, make sure to hit the Space Needle – I am pretty sure you have seen it in all TV shows. Pike Place Market is another one, as well as Pioneer Square. You should also go to Discovery Park and Lake Union.

New Orleans is a popular destination for its Mardi Gras

One can’t talk about the best cities in the United States and not mention New Orleans, in Louisiana. Famous for its carnival, this city has so much to offer to its visitors. If you happen to visit, make sure not to skip the incredible French Quarter and Marigny, a neighborhood just east of it. The City Park and the Museum of Art are two more places you really don’t want to miss.

New Orleans is also famous for its jazz scene – that should be enough to have you packing, if you ask me!

Rumor has it that Austin is the coolest city in Texas, and with that one of the best cities in the United States. If you happen to visit this part of the country, definitely make it a point to go.

Austin has quite a bit to offer to visitors, and between that and the laid back attitude of its inhabitants it is an extremely pleasant place. Make sure not to miss places such as the Umlauf Sculpture Garden and Museum, the Capitol Building and the Museum of Art.

The Continental Club is a great place to listen to music and Magnolia Café is one of those diners that seem to have come out of a movie set.

Boston is a lovely place to visit

Last, but definitely not least in my pick of best cities in the United States there is the elegant Boston. Once again the set of one of my favorite TV Shows from the 1990s – have you ever heard of Ally McBeal? – the city is so Victorian in style that you will often think you are in England rather than in the US. But alas, it’s a fantastic place.

Among the must see in Boston, you can’t miss Boston Common and Public Garden, the Museum of Fine Arts, Old North Church and North End – the oldest residential part of town.

The Waterfront is a great place for a walk, much like Charles River Esplanade. Make sure not to miss  Boston Tea Party Ships and Museum.

Have you ever visited the United States? What’s your favorite city there?

Further readings about the United States

Make sure to read my other posts about the US:

Pin It For Later!