Where Is Sardinia, Anyways?

We Sardinians are very proud people. We are completely, deeply, madly in love with our land to the point that we have a saying according to which when God created paradise he actually ended up creating Sardinia. Yes, it is a gorgeous place and many a visitor find it so. I have heard people stepping to a beach here say “I want to die here” or “I want to stay here forever”. Even my father, who’s not originally Sardinian, once here decided to never leave. You can figure out the story, right?

I had to show my Sardinian pride even when I was in Chile!

Do You Know Where Is Sardinia?

But, can you figure out where is Sardinia? Because really, not many people outside the Mediterranean region actually know where is Sardinia. And when they do know where it is, they have no idea what it is all about, what it is like, what we Sardinians look like and how we live. Not even my very Italian grandmother knew it, and according to legend, when she came to Sardinia for her son’s (my dad) wedding, she got off the ferry that brought her here, she looked around and apparently exclaimed: “Oh, so you do have streets!”

That’s where Sardinia is – photo courtesy of http://www.freelargeimages.com/

Yes, Sardinia is an almost mythical land. It is Italy, but not really Italy. Sardinians are Italian on paper, and we do speak Italian, but next to that we also speak Sardinian, which by the way is not a dialect but a fully fledged minority language (don’t ever dare asking a Sardinian if we do have our own dialect!), as well as Catalan (the same they speak in Barcelona) in some areas in the North of the island.

But we are different. We feel different. So different that when we go to Italy we call it “the continent” (AKA Europe) and as soon as we set foot there we feel like we are in a different country altogether. Mind you, it also goes the other way around: Italians visit Sardinia and they do get the same impression. It’s the same country but the vibes are different, the people are different and the atmosphere is different.

How can anybody ignore Sardinia?

So, imagine how frustrating it is for us to find out that not everybody in the world knows how amazing Sardinia is, and that in fact the majority of the world doesn’t even have a remote idea of where is Sardinia. Because really, most people don’t know (and why would they? I am terribly ignorant when it comes to the world, a gap in my knowledge that I am filling in through traveling).

When I am traveling and get to meet other people – at times locals, at times other travelers – I normally have conversations where one of the first question we ask each other is “where are you from?” Then I say I am from Italy. This obviously prompts the next question, because well, everyone knows where Italy is, right? That’s when I drop the bomb and say I am from Cagliari, Sardinia. The look I get in return is a blank face, much like this. 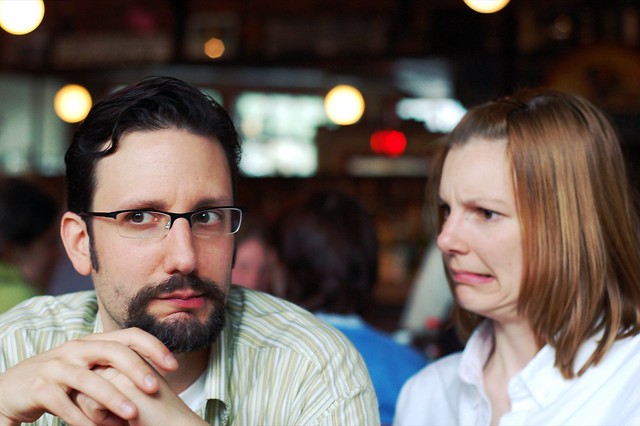 Sardinia? What? Where? – photo courtesy of Brian Talbot (flickr)

Then a number of questions follow: is that near Rome/Milan/Venice? Is that North or South? Next on, the comments on mafia, which by the way is meant to be Sicilian (that means, not Sardinian), but actually exists all over the world (Shantaram and the Bombay mafia docet). Then I eventually hear the “oooooh, beautifuuuuul!” exclamation, which translates into a “I have no idea where that is, but I will say it is beautiful just in case”.

However, the funniest “where the hell is Sardinia” anecdote that I have to date is one that dates back to the year 2001, when I was studying at the University of Denver, Colorado. I was sitting at the library, with another Italian friend. We were talking, perhaps a bit too loudly, so a lady nearby could hear us and realize we were not from the US.

She was delighted to hear us speaking Italian, and thus she sat by us. She had been to Italy the previous summer and she was keen to tell us how amazing she thought it is. She then asked us where we were from. My friend replied he’s from Bologna, and it turned out this lovely lady had been there and could even remember some of the landmarks of the city. She then looked at me and when I said I am from Cagliari, Sardinia, she gave me the blank face and said: “ooooh, beautifuuuuul!” – as good measure.

Would you dare to say Sardinia is not beautiful?

But I felt like being a bit mean that day (shame on me!). So, although I knew she had no idea where is Sardinia on the map, I asked her if she had been there. She hadn’t, she said. But she quickly added that she and her husband drove by it once. That’s when I returned the blank look. What? I then told her Sardinia is actually an island. That’s when she asked me if I was sure.

In an effort not to explode in laughter, I replied I was quite sure, since I grew up there. That’s when she gave up, but not before adding that in fact they did take the ferry to it one day to visit for a few hours. Pity was, as I explained, that it takes 13 hours to get to Sardinia by ferry from mainland Italy (FYI, nowadays there are faster ferries that take around 4 or 5 hours too), so it would be highly unlikely that she had been there for a few hours. She finally stated she had never been to Sardinia!

People from Latin American countries actually have a better idea of where Sardinia is. No, it is not that they are genius at geography or that they have all travelled there – although maybe some have. It is thanks to their passion (or rather obsession) for football. Even in the most remote places in Honduras, Panama, and Colombia the receptionist of the hostel where I had just arrived happily returned my passport to enumerate the various football players from their home country that in better times (when Cagliari was a team worth following) have played in Sardinia.

What Sardinians wish you to know

What makes me – and many other Sardinians, bloggers or not – a bit sad is that most people visiting Italy for the first time, or returning there, skip Sardinia altogether. They don’t know where it is, they don’t know what’s in it and they don’t think it is worth visiting.

Besides, those who actually know about Sardinia are convinced that it is too expensive to travel here. It really is a pity, because Sardinia has a lot to offer to travelers, whether they are flashpackers who only have a few days to enjoy its beauty, backpackers who have a limited budget, people who can afford a more luxurious vacation, adventure seekers, nature lovers and even family with small children.

Sardinia is special in any season. It is perfect during the summer, when it is possible to enjoy its gorgeous beaches (where access is free, by the way!) and swim in its incredibly crystal clear waters.

It is great during the spring, fall and winter, when we have lots of wine and food festivals, lots of cultural events like the Sartiglia (the carnival) in Oristano or the Sant’Efisio parade in Cagliari, and it is time to enjoy some of the best hikes in Europe.

It has beautiful cities and villages.

Bosa is one of the prettiest villages in Sardinia

There are unique archeological sites that won’t be found anywhere else in the world.

Its food is delicious. Its people reserved yet warm and welcoming.

Sardinia may have some faults (who doesn’t?) but don’t be surprised in finding that only Sardinians are allowed to talk about them and to criticize Sardinia.

So, now that you know where is Sardinia, don’t make the mistake of not visiting!

Have you been to Sardinia? What did you like the most about it?

Pin It For Later!